""I learned how destructive and horrible war can be...and how much suffering and pain people from both sides of our community endured..If everyone in Ireland could see what I've seen here, our conflict would be over" "Mary, Community Worker

We Were Brothers School Production

‘A key opportunity to keep alive the spirit of friendship forged by the soldiers of the Irish and Ulster divisions - and to keep it alive for future generations.' Glen Barr, OBE.

The "We Were Brothers" story, written by Felicity McCall and directed by Steve Wakely, promotes reconciliation through an understanding of a shared past. It is based on Messines in June 1917, whereby soldiers from Ulster and Irish battalions of the British army fought side by side for the first time to liberate Belgium from German occupation. The "We Were Brothers" project remembers a generation of young men, who put aside the ties of religion and politics and, somehow, found a common humanity in the unimaginable horror that was the Western Front.

Three schools from Derry/Londonderry, brought together as part of the International School for Peace Studies (I.S.P.S) Schools Link Programme; St.Cecilia's College, Lisneal College and Oakgrove Integrated College, have toured the country with their schools production of the play. The students, who visited Messines in Belgium, were from different traditions, brought together by the ISPS, to explore issues of diversity and to learn about and from each other.

The tour was kindly sponsored by the International School for Peace Studies, the Department for Foreign Affairs and Magherafelt District Council Peace III.

‘We Were Brothers' schools production tour dates were as follows:

John Harkin, vice principal of Oakgrove College, stated: "The We Were Brothers project should allow young people to explore their family history, to know their relatives and not to be ashamed of them. I hope it will help to bring us to a day when we can all express our views on conflict past and present, without contemporary political judgements being made, where people can feel free to remember, or not to, and to be respected"

To view a short clip from the production simply click here.

Acclaim for the "We Were Brothers Production"

Supported by the Heritage Lottery Fund, the production was named the UK's Best Heritage Project at the prestigious National Lottery Awards in London on 5th November 2011.

There are seven categories in the National Lottery Awards, each reflecting a specific area of Lottery funding. The production beat hundreds of projects from across the UK to win the coveted title.

The award follows the success of the entire "We Were Brothers" project, which includes a play, DVD, website and youth project (school's production). 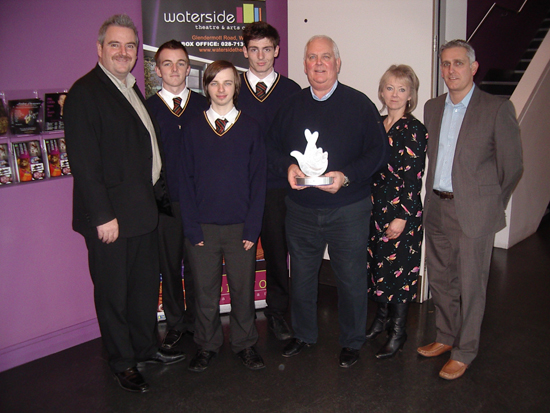 Connect with us now!